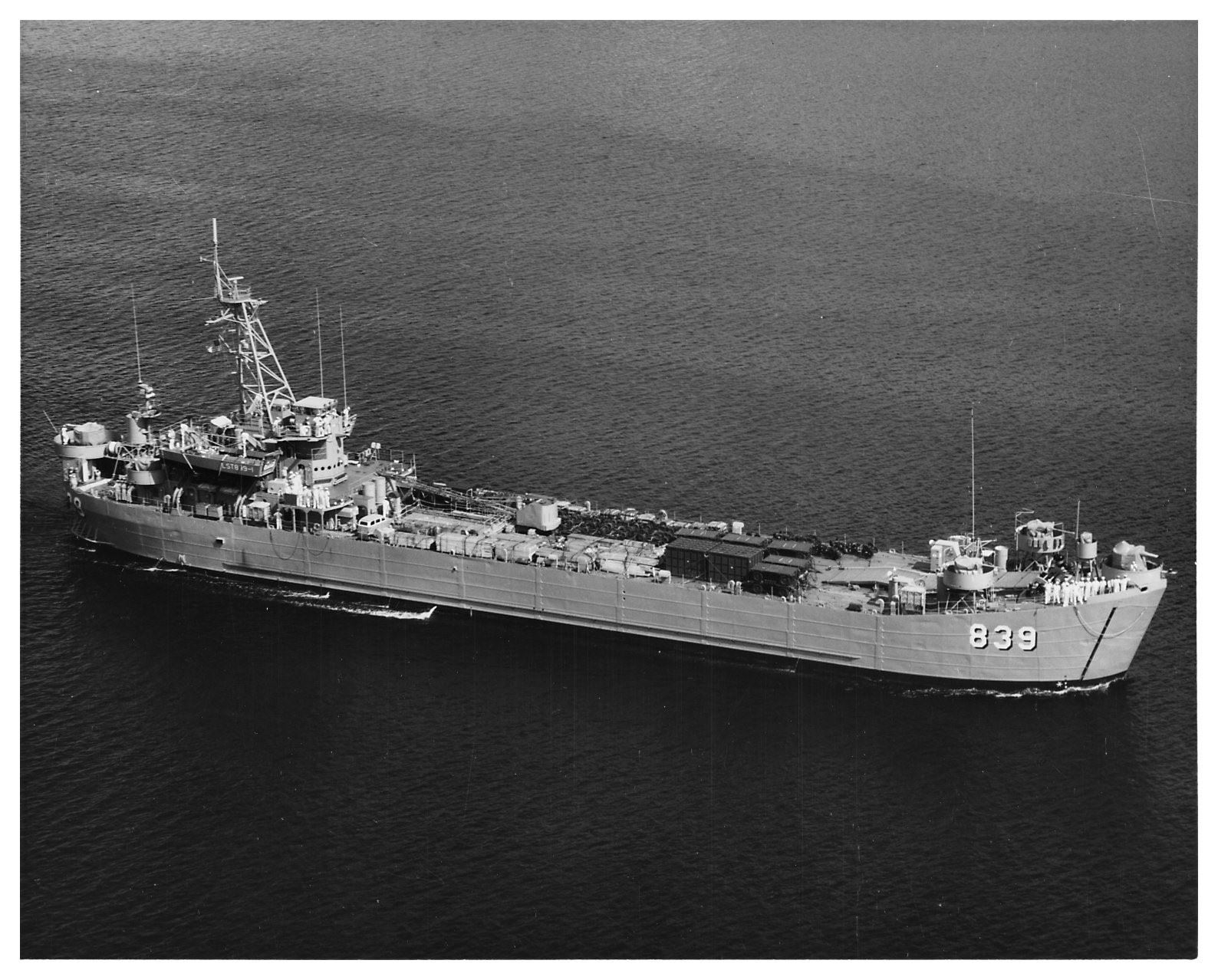 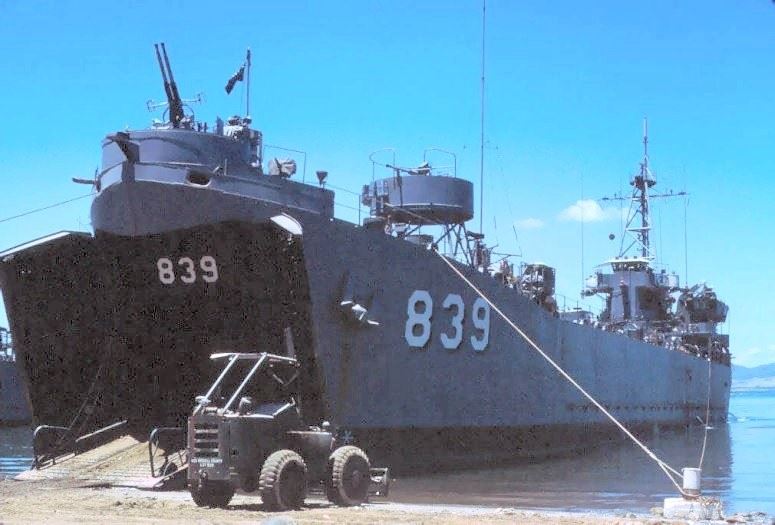 The LST stood for “Landing Ship, Tank” and the LST-839 was an amphibious warfare vessel used to land tanks, men, and equipment. The ship was designed with the ability to deliver ground forces to enemy shores along with the equipment they would need to gain a foothold and push inland.

The ship was laid down by American Bridge Company based out of Ambridge, PA, on September 25, 1944.  It was launched on November 12, 1944 and sponsored by Mrs. Arthur Lehner. The USS Iredell County LST-839 was first commissioned at New Orleans, LA, on December 6, 1944 with Lt. Waldo F. McNeir in command. The ship was one of 24 transport ships named for counties in North Carolina. The ship was 328 feet long and had a beam width of 50 feet.  Its maximum speed was 12 knots. The ship displaced 3960 tons and normally carried a compliment of 7 officers and 104 enlisted men.  The ship was armed with two twin 40MM gun mounts with MK.51 directors, 4 single 40MM gun mounts and 12 single 20MM gun mounts. It was propelled by two General Motors 12-567, 900 hp diesel engines, two shafts, and twin rudders.

The USS Iredell loaded with Army troops and cargo departed New Orleans for the Pacific on January 9, 1945.  She was assigned to the Asiatic-Pacific Theatre and would participate in the Okinawa Gunto Operation involving an amphibious assault and the occupation of Okinawa.  She reached Saipan on March 10 to support the invasion of Okinawa. The campaign to take Okinawa was well underway when she arrived at Kinmu Wan, Okinawa on April 17.   Despite enemy air raids, she debarked troops and discharged cargo, then returned to Saipan on April 21 to transport additional troops.  During the remaining four months of the war the LST-839 shuttled troops and equipment among the Marianas, Philippine, and Okinawa staging areas for the possible invasion of Japan.  The ship returned to Astoria, Oregon on January 25, 1946 after the war ended and was decommissioned at Vancouver, Washington on July 24, 1946.  She then entered the Pacific Reserve Fleet and it was while she berthed in the Columbia River she was named the USS Iredell County (LST-839) on July 1, 1955.

On June 18, 1966 at San Diego, CA, the Iredell County was recommissioned.  After completing training, she sailed to join the 7th Fleet on September 3, 1966.  On October 12, 1966 the USS Iredell County departed for Danang, Vietnam, arriving on October 21.  The ship shuttled petroleum, building materials, rations, troops, and other equipment between Danang and Chu Lia, 65 miles to the south. Lt. Harvey Danielson, the Iredell County’s commanding officer in 1969, was quoted as saying, “If an item can be moved or moves by itself, LST’s can, and probably have carried it to Vietnam."

The USS Iredell County was basically the size of a destroyer, but yet capable of floating in only 15 feet of water.  The ship could push its bow right up onto the shore and then open its two huge doors allowing men, equipment, and supplies to step right out on dry land. In Vietnam the Iredell would often travel up the countries shallow rivers to reach American soldiers fighting inland away from any sort of loading dock or landing strip. Lt. Danielson said “It seems strange to be able to go places and do things with an LST you wouldn’t even think about with another ocean-going ship. The LST will almost turn in its own length, and some people swear it will float in a heavy dew.”

With its ability to travel up rivers deep into the Vietnam jungle, the USS Iredell County was able to serve as a mother base for troops fighting on land. A Navy Journalist writing in June 1968 said, “On occasion the crews of the LST have become orphans in their own ship.   They often sleep on the decks so that weary ground forces could enjoy the comforts of a bed or hot shower when aboard for a few hours of rest.  When the LST’s are docked near a combat area, the cooks sometimes work around the clock preparing hot food for the field forces.  It is then delivered to the man ashore by the ship’s crew."

The ship made seven deployments to Vietnam and took part in eight campaigns including the Vietnamese Counteroffensive Phases II, III, IV, VII, and the Tet Counteroffensive.

The USS Iredell County was again decommissioned in July 1970 and transferred to the Indonesia Navy where it was renamed “Teluk Bone 511.”  In February 1979 the ship was sold outright to Indonesia.

The deck log books of the USS Iredell have recently been digitized and are available to view on the National Archives website. 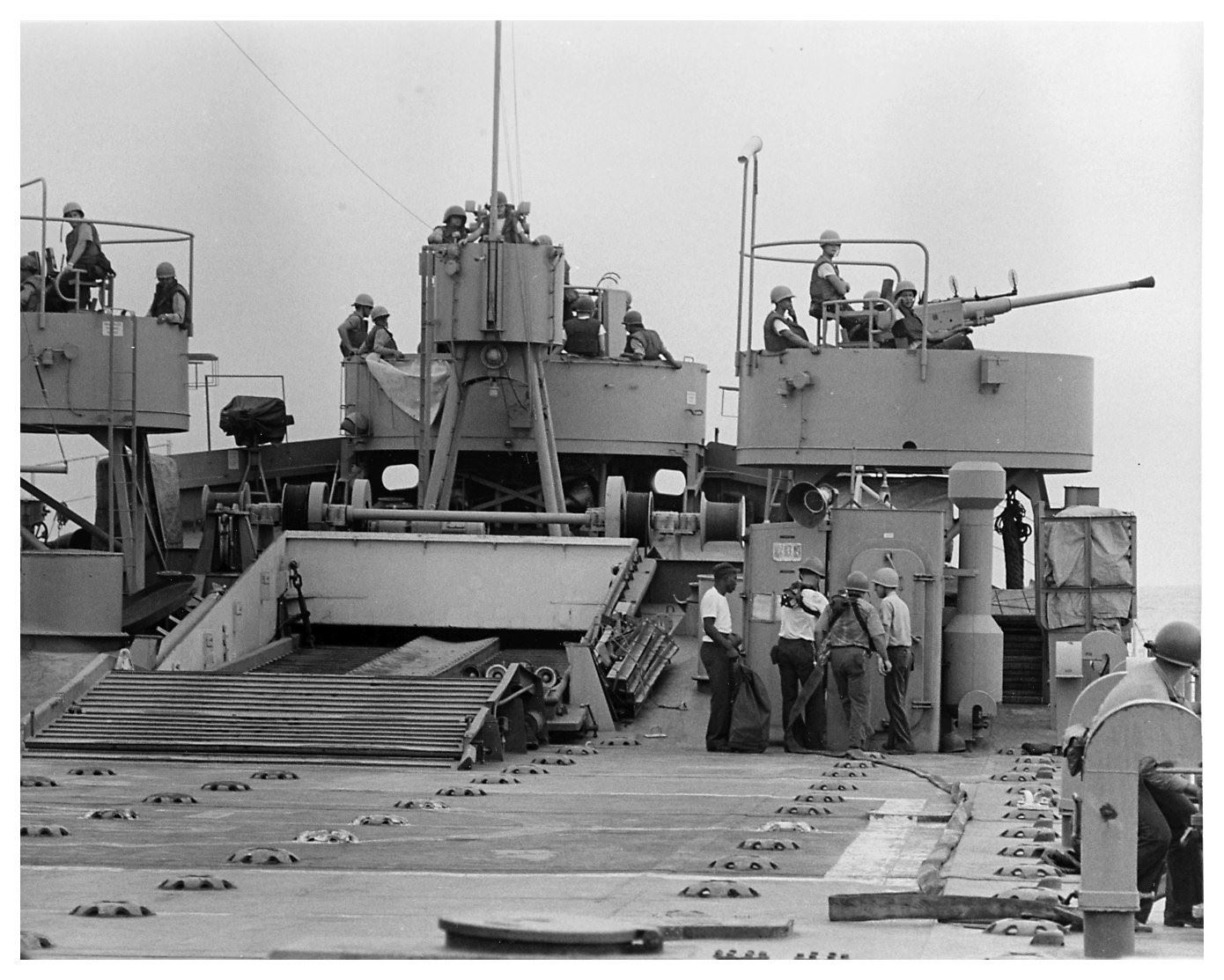 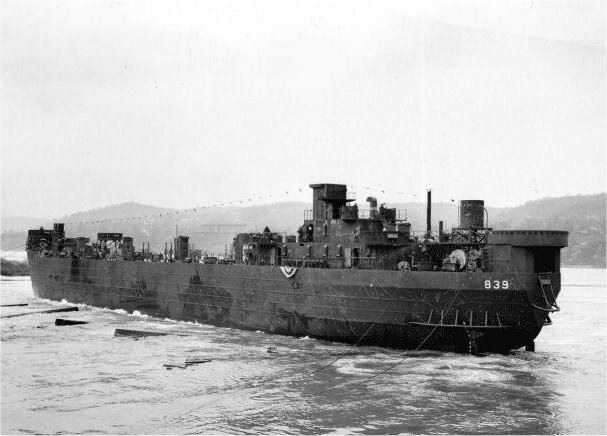